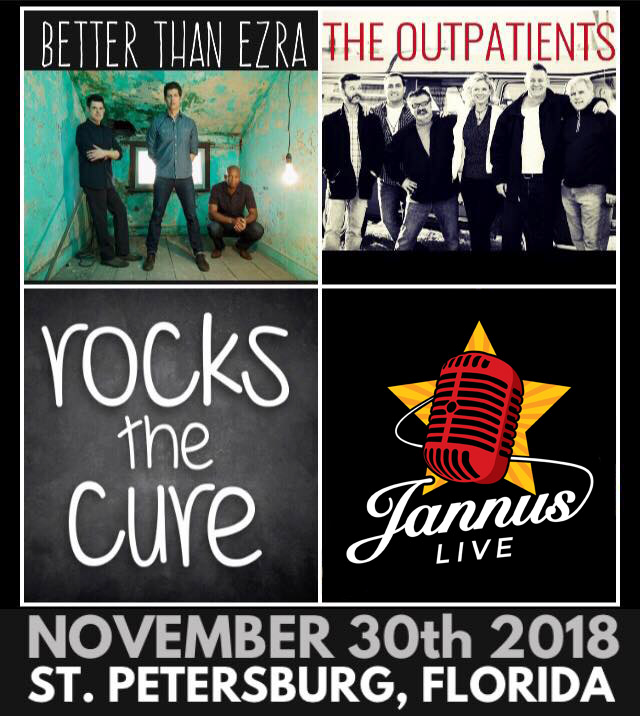 Anytime a concert at Jannus Live in St. Petersburg Fl. happens it’s always a great time. On Friday November 30th though it was a very special occasion. Tonight, was a benefit concert for Rocks The Cure, a non-profit organization that raises money for pediatric cancer research. Of course, what’s a benefit concert without the concert, and tonight entertaining everyone is New Orleans based alt rockers Better Than Ezra with a local band The Outpatients opening for them.
Instead of a support band hitting the stage first to warm up the crowd and get them ready for the main act, tonight things were much different. Tonight, people from Rocks The Cure took to the stage to explain to the crowd why they were here tonight. While concerts are supposed to be fun events, the emcee introduced a mother and her teen son, who is a cancer survivor. Eloquently she explained how they discovered her son’s leukemia. She went on to read some sobering statistics such as the average age of diagnosis is six years old, cancer is the second leading cause of childhood deaths, and only four percent of all money for cancer research goes to pediatric cancer. Knowing all this makes it such a worthwhile event and that everyone in attendance is doing something to help fight pediatric cancer. After this, it was time for the music to start! Opening the night is Clearwater Fl. based band The Outpatients. They are made up of Ken Jewell the lead singer, rhythm guitarist Steve McNulty, lead guitarist Glen Griffith Brett McInery on keyboards, Jim Wasenda the drummer, and bassist Tori Lewis. Tonight, they were in fine form playing a set that consists of covers from bands like U2 and Tom Petty and The Heartbreakers and of course from their own EP Fall From Grace. The fans were really enjoying their performance and singing along.

After they finished up it was time for Better Than Ezra to take the stage. Formed in Baton Rouge Louisiana in 1988, they are made up of Kevin Griffin the lead singer and guitarist, bassist Tom Drummond, James Arthur Payne Jr. on keyboards and guitars, and Michael Jerome the drummer. Hitting the stage to cheers from the big crowd they broke into “Misunderstood” off their 2001 release Closer. It was obvious from the beginning that the guys in the band were here to have fun as they were all smiles during the show. The fun continued when they played “Extraordinary”. Towards the end of the song, singer Kevin Griffin changed up some of the lyrics to add a silly touch to it, not only making the audience laugh but making bassist Tom Drummond laugh as well. At one point during the show, Kevin Griffith said that because The Outpatients played a Tom Petty song, that they had to play one too and promptly broke into a great version of “Breakdown”. Of course, they played their biggest hit “Good” which had everyone singing along note for note. A surprise of the night was when they did an amazing cover of “Laid”, the song made famous by the band James in 1993. One of the most fun and memorable moments of the show is when they broke into an awesome medley of classic 80’s songs “Tainted Love”, “Baby Baby”, and “I Melt With You”. You could see the crowd dancing and singing along. Another fun cover they did was the classic Hall & Oates song “Sarah Smile”. When they were performing this number at one-point Keven Griffin was sitting at the edge of the stage singing to the lucky fans that were right in from of him at the rail. The final song of the night was their hit song “King of New Orleans”.

While the cause that brought The Outpatients, Better Than Ezra and all the lucky fans in attendance to Jannus Live is a serious subject, the performances by both bands created a fun atmosphere of great music. The Outpatients were a great act to get the fans going. Of course, Better Than Ezra put on such a fun show. Their setlist was chock full of their great songs and amazing covers. But the big winner of the night was the charity Rocks The Cure as proceeds from the show went to this worthy charity .