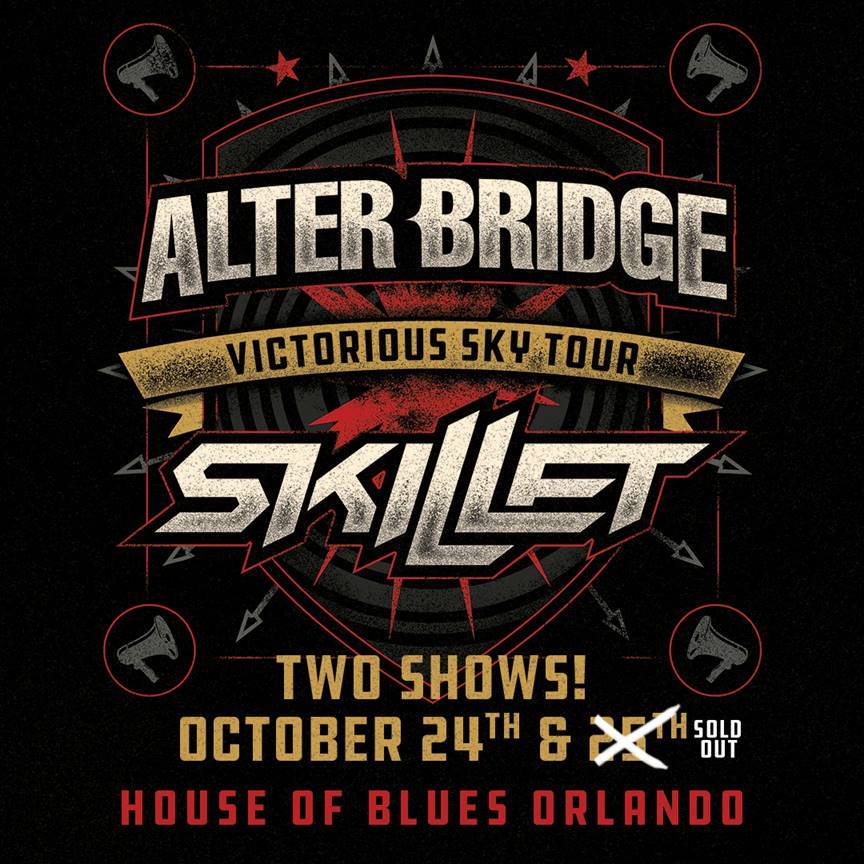 Orlando, Florida (October 25, 2019) – It’s Friday night, and the sold-out crowd is making their way into the House of Blues Orlando and the feeling in the crowd is pure electricity. Tonight, is a special night for sure; not only is it the second of two nights at The House Of Blues for the Victorious Sky Tour Featuring , Skillet, Alter Bridge, and Dirty Honey, but final show of the tour is a homecoming show for Alter Bridge. With both Alter Bridge and Skillet just releasing new albums Walk The Sky and Victorious respectively, there would be plenty of fresh new music to go along with fan favorites. Opening for both bands would be hot new act Dirty Honey.

When it comes to generating a buzz, nothing does the job like a band that comes seemingly out of nowhere and sets people on the ear and Dirty Honey has definitely accomplished that mission. In the short time they’ve been together they accomplished something no other band has ever done; they earned a number one song on the charts without being signed to a record label. When the band hit the stage, they came out like well-seasoned pros. It’s obvious they have taken notes from all the heavy hitters they have toured with. Singer Marc LaBelle was decked out in a top hat ala the mad hatter with an ace of hearts tucked in it and a Led Zeppelin T-shirt under his jacket. Not only did he look the part of a front man, but when he ripped into their first song “Scars” he owned that roll. Guitarist John Notto and bassist Justin Smolian worked the stage like they were born to do it. Drummer Corey Coverstone was the epitome of cool just hanging back and keeping the songs tight and in time. When they played “Down The Road”, a slow but powerful blues drenched song all you could help think was this is straight out of the time when vinyl ruled, and streaming wasn’t even a word. Of course, they played the song that put them on the map, “When I’m Gone”, which was a total aha moment for the crowd. You could see people saying to their friends “Oh my God THAT’S who plays that song” excitedly. For sure their performance it is nothing short of a straight up rock n’ roll revival. It may be too soon to tell if they are going to rescue rock n roll. But, it damn sure feels like they are going to accomplish just that.

With barely enough time to for the audience to catch their breath, it was now time for Skillet to take the stage. With every inch of the House Of Blues stage dedicated to Skillet and their stage setup you had a feeling that their patented high energy show would be in full effect. When it comes to stage entrance’s Skillet’s belies what’s about to come, they calmly amble on to the stage smiling like they are just off a coffee break. But the second they kick into the first song “Feel Invincible”, it’s like a switch gets flipped and the energy level smashes through the stratosphere. With the level of energy singer/bassist John Cooper throws into his performance, you just FEEL every word of this crowd singing, foot stomping anthem. The first taste off of their new album Victorious, was “You Ain’t Ready”, and the words certainly rang true as not a soul in the place was ready for the amazing performance that Skillet was bringing to the stage. As if he was trying to cool off the fire he started, John Cooper broke out and strapped on his trademark CO2 cannons and was firing them off out towards the screaming fans. Cooper isn’t the only one in the band who seemed like that had a double shot of nitro-fueled espresso. Kory Cooper, guitarist and wife of John Cooper, is a show unto herself. With her black and blue hair flying, she was in constant motion, whether she was jumping around or getting up on one of the riser and jamming out you couldn’t keep your eyes off of her. “Back From the Dead” and “Legendary” were also massive hits for the crowd as well. During both of those songs the crowd was singing louder than the band. Drummer Jen Ledger took a break from the drum kit and came down to perform “Hero” alongside John Cooper that also had plenty of Co2 shooting up from the stage during the song. The final song their high energy hit song packed set was another fan favorite “The Resistance”.

After two hot performances, everyone was ready for the final band of the night, Alter Bridge. As tonight’s show, as well as it being the last night of the tour, was being held in Orlando, the hometown of guitarist Mark Tremonti and drummer Scott Phillips, the partisan crowd was definitely revved up for this part of the show. As the house lights dim and blue lasers sweep across the venue left to right, “One Life” is playing as the band takes their places on the stage. As they get into place the lights come up and the band launches into the “Wouldn’t You rather”, the first single from their just released album Walk The Sky. With a dazzling light show going on behind everyone, along with Myles Kennedy other worldly vocals and Mark Tremonti’s transcendent guitar work this was a mere taste of what was ahead for everyone. With barely a moments notice they reached back into ABIII and launched into a blistering version of “Isolation”. Whether they were amped up from Skillet‘s show, or they wanted to give something extra to their hometown fans, either way it seemed as though Mark Tremonti was on absolute fire. His guitar work was beyond that of mere mortals. The next cut off of Walk The Sky they played was “Pay No Mind”. Of course, they played it brilliantly and on the strength of the two songs they’ve played so far, this album is another must have for your collection. Myles Kennedy was able to take a breather from doing all the singing when they played “Waters Rising” as Mark Tremonti took over for this one and sang it beautifully. Myles Kennedy may very well be a generational voice, but his guitar work is nearly at the level of his band mate, so when he started in with his part of the intro to “Cry Of Achilles” it was one of those goose bump moments when Tremonti joined in as they absolutely crushed it live. Seeing bassist Brian Marshall come to the front of the stage for his thundering moment during the song just added to this highlight song of the show. For all the lucky fans, on this night they got to hear the debut of a new song “Dying Light” off their new album. Now it was time to slow things down a bit. The house lights dimmed briefly. When they came up, sitting on two stools was Kennedy and Tremonti, with Mark holding an acoustic guitar. They played a passionate and earnest version of “In Loving Memory” which had the audience pin drop quiet and entranced. At one point Myles Kennedy turned his mic to the crowd and they sang their part perfectly. Now it was time to kick things back into overdrive when they ripped into one of their most popular songs “Metalingus”. Like all concerts, they must come to an end, and they chose a perfect song to close out the show “Rise Today”.

When Skillet and Alter Bridge come to town there’s always going to be a packed house. But put them together on the same night and it’s now a concert for the ages; and indeed, tonight’s show was one for the ages. If tonight was any indication as to how this tour went, it had to be an epic one. Then add in Dirty Honey and you have a show that steals the name of a Skillet song “Legendary”. While this tour might be done and, in the books, you can always go out and get Skillet‘s new album Victorious, Alter Bridge’s latest release Walk The Sky, and Dirty Honey’s self-titled EP and take the concert with you wherever you go.