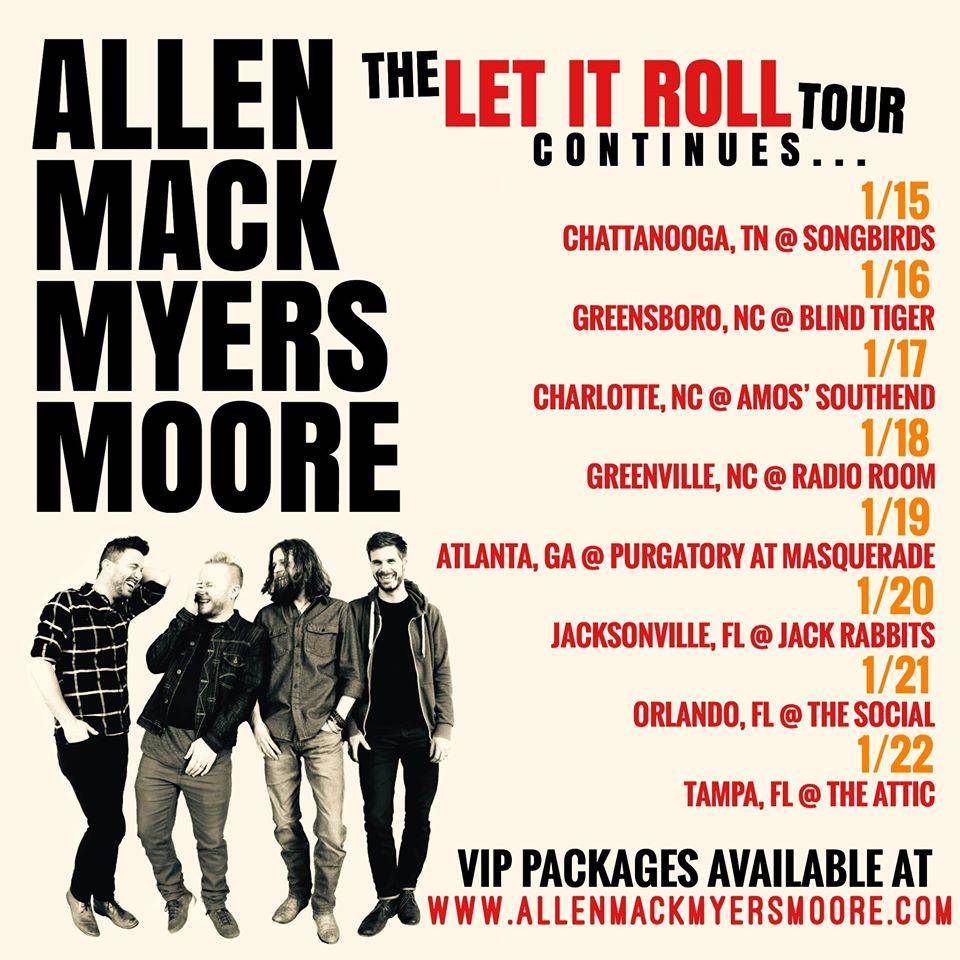 Tampa, Florida (January 22, 2020) – It’s the middle of the week and a small, intimate crowd has packed into The Attic; an equally small yet tastefully decorated room above a local watering hole The Rock Brothers Brewing Company in Ybor City. The draw tonight is Allen, Mack, Myers, Moore. While they may not be known to everyone, to those in the know the Myers in the name belongs to Zack Myers. Yes, the guitarist whose full time gig is in Shinedown, the platinum multi-hit band that sells out arenas. As this is an intimate gig, Frank Viele was the perfect choice to get this show going.

As the crowd is quietly talking amongst themselves, a subtle shift in the already subdued lighting was the first hint that things were about to begin. As everyone turned to the stage packed with instruments, a single guy made his way on stage. Armed with just an acoustic guitar, Frank Viele sat center stage on his stool. As he started strumming the chords to “You Don’t Have To Go” everyone politely started to watch. When he started to sing, his gruff voice that has a tinge of Joe Cocker to it delivered the poignant lyrics in a way that just mesmerized everyone. He followed this up with “If You Could Only Read My Mind”, another passionate, moving song.

In between songs, he would tell stories of being on the road, or how a song came to being that utterly captivated the audience. At one point telling everyone about how when he was younger, after an incident that he got some ice cream and a ninja turtle and how even now he still wants both every now and then. Of course, someone yelled which turtle, which he quickly quipped “sometimes you feel like Donatello, other times Michelangelo“, which caused everyone to laugh. While he was definitely new to this audience, he played a classic song that everyone knew, the Bob Seger hit “Against the Wind”. With just him and his guitar, he delivered a hauntingly beautiful version of this classic song. As he was getting ready to play his last song, he told the audience that this is the one got him noticed and on the radio. He went on to say that guitar virtuoso Joe Bonamassa heard a version of it and insisted that when he records it that he would play guitar on it. He then launched into “Broken Love Song”.

The turnout was now good and warmed up, and of course excited to see Allen, Mack, Myers, Moore. With everyone huddled up to the low set stage that is barely a hop up from the floor, everyone was surprised as the guys sauntered through the crowd individually and made their way to the stage. But it really shouldn’t come as a surprise to those that truly know the band. What started out as a fun little acoustic side project between Zack Myers the guitarist in Shinedown and his friend Chris Allen, quickly grew to add Zack Mack and J.R. Moore. With three studio albums under their collective belt, including their latest effort, Let It Roll, they have had plenty of time to build a reputation as a highly entertaining and unpredictable live show. Tonight, would only cement that reputation.

As everyone in the band picked up their instruments, they broke into “Beautiful Sound” off of their latest album, Let It Roll. With Zack Mack and Zack Myers playing acoustic guitars, J.R. Moore on bass, and good friend Shawn Zorn on drums they sounded amazing! With a sound that combines all the music they grew up with from country to rock, it’s pure americana. Everyone except drummer, Shawn Zorn, took turns with singing duties and harmonizing as well, showcasing just how amazing the talent level in this group. Then again, with 25 Billboard Rock #1’s, a Billboard Top 40 #1, and 7 Billboard Hot AC hits between them in their respective groups, it shouldn’t be a surprise at all.

When they got done, Zack Myers commented that he usually doesn’t talk early on in their shows and he doesn’t mind it a few laughs at his expense. He then went on to say at sound check he broke one of his guitar strings. Fast forward to show time, he completely forgot all about it right up to when he started to play. Yes, he played the entire song with five strings. Of course, his band mates chimed in saying stuff like “you never hear anyone say I wrote that one on a five string“. This would be the hallmark of the night. There would be laughter, stories, and of course great music.

What also makes the shows so much fun is the unpredictability. With no setlist to speak of, they play what they feel like in that particular moment, and sometimes even that moment can change, too! There were times where Myers would change things up at the last second while Mack was picking up a guitar setup for one song only to have to quickly change yet again. As Myers is part of Shinedown, of course his music with that band would make its way into the nights performance.

With his humorous flair in high gear Myers introduced the first Shinedown song of the night “Shed Some Light”. Of course, it sounded brilliant, but the guys decided to add a twist to it. They turned it into one helluva nineties medley by seamlessly transitioning into Alice In Chains “Nutshell”, then Pearl Jam’s “Black”. What a masterpiece that was. How they were able to go from song to song without anyone realizing they changed songs speaks to the incredible talent on the stage. For most concerts that would have been a highlight moment. But at an Allen, Mack, Myers, Moore show it’s just one of many incredible moments that they gleefully pack into the night.

From a hauntingly beautiful, stripped down rendition of the The Black Crowes hit “She Talks To Angels” that had Mack playing slide guitar while Myers sang, to a great version of the Tom Petty classic “The Waiting”; to a rousing rockabilly version of the Queen song, “Fat Bottom Girls”. While the show was chock-full of cover songs, they also played plenty of their original material. As they have a new album out, Let It Roll, there would be a nice helping of songs from it played tonight. With a killer introduction from Myers, Mack took over singing duties with “Ain’t My Time” off of Let It Roll. J.R. Moore sounded amazing on “Forever and Seventeen”.

As all performances must come to an end, and Allen, Mack, Myers, Moore do things their own special way. They unplugged everything, grabbed their acoustic guitars, left the stage and asked everyone to circle around them. As the audience was now surrounding them, they played the title song from Let It Roll. If there was a way to make things even more intimate then they already have been, this was it.

While there are plenty of bands that rely on over the top stage shows, incredible lighting, or even pyro, to create a memorable concert, Allen, Mack, Myers, Moore do it with amazing musicianship, brilliant storytelling, laughter, a dash of unpredictability, and of course, great songs. Then when you hold a show like this in a small, intimate setting, you get a concert that’s about as close to perfection as possible. As this is a side project, their tours are short and not too often, so keep an eye out. When they do hit the road, snatch up a ticket so you can enjoy the night of your life!!