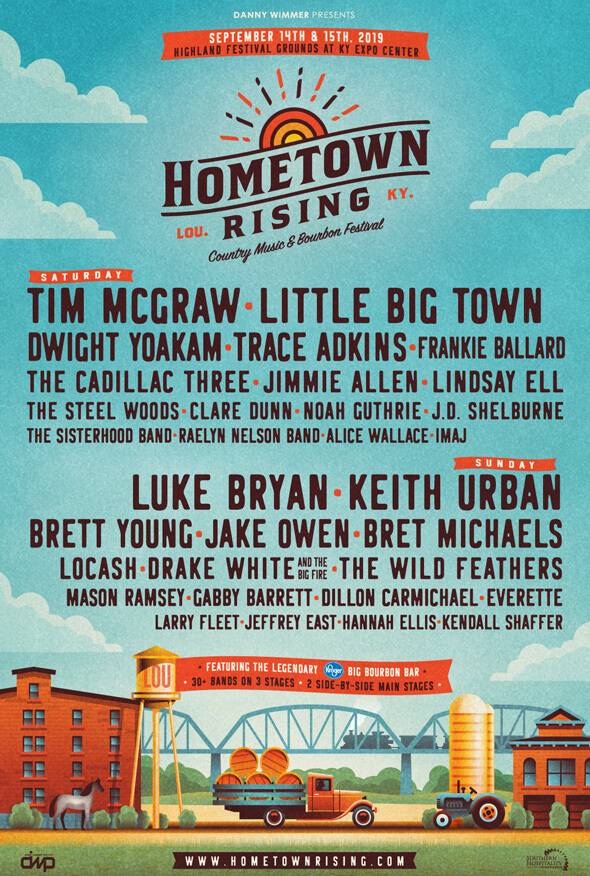 The debut Hometown Rising Country Music & Bourbon Festival will hit Louisville this September as a kickoff to three weeks of music at the Kentucky Exposition Center.

Its lineup — with legacy acts such as Tim McGraw and Dwight Yoakam slotted alongside newer performers like Frankie Ballard and Jake Owen — would be impressive for any festival, regardless of its age.

But for a first-time fest? The stack is almost unheard of.

With tickets going on sale Friday, we know all you country fans are dying to hear more. So we spoke with Danny Hayes of Danny Wimmer Presents, the events production company behind Hometown Rising, about what festivalgoers can expect.

“In terms of first-year festivals, there’s not many country festivals that are going to come out with this big and expensive of a lineup out of the box,” Hayes said

All four are big names that are sure to draw a crowd. But guests will want to show up early for up-and-coming acts such as Kassi Ashton and Lauren Jenkins — two of the 11 female-led acts performing at the festival.

Since 2014, Danny Wimmer Presents has made a show of including bourbon and elevated food at its Louisville festivals, including Bourbon & Beyond and Louder Than Life, and Hometown Rising will be no different.

The event will feature seven separate areas where guests can try bourbons from more than a dozen brands, including Angel’s Envy and Elijah Craig.

Expert Fred Minnick will again curate the bourbons available at the festival, and he’ll organize discussions and demonstrations at the Mash Stage.

Forecastle Festival: Forecastle tickets go on sale today. Here’s how to get them

“We’re bringing a lot of Kentucky-wide chefs to the festival,” Hayes said. “We don’t know yet how we’re going to do it, but there will be some form of a callout to the greater Kentucky chefs.”

Already booked are Edward Lee of 610 Magnolia, Milkwood and Whiskey Dry, and Anthony Lamas of Seviche, who’ve been involved with Bourbon & Beyond.

Louisville restaurants: This Mexican restaurant might have the best guac around

Danny Wimmer Presents will produce Hometown Rising, Bourbon & Beyond and Louder Than Life on three back-to-back weekends in September.

The company invites guests to buy a “Trifesta” pass to all three festivals for $229 plus fees (cheaper than one ticket to the four-day Bonnaroo festival in Tennessee).

The pass will be transferable, Hayes said, meaning a guest could hand their ticket off to a friend or family member if they don’t want to attend all of the festivals.

The idea is to make the festivals affordable to anyone who wants to go, Hayes said.

► The Kentucky Exposition Center, 937 Phillips Lane, has 19,000 parking spaces where festivalgoers will be able to park.

► The festival will continue to be outdoors in an area that Danny Wimmer Presents has dubbed the Highland Festival Grounds.

Find more information on tickets to Hometown Rising and the Trifesta pass at hometownrising.com.