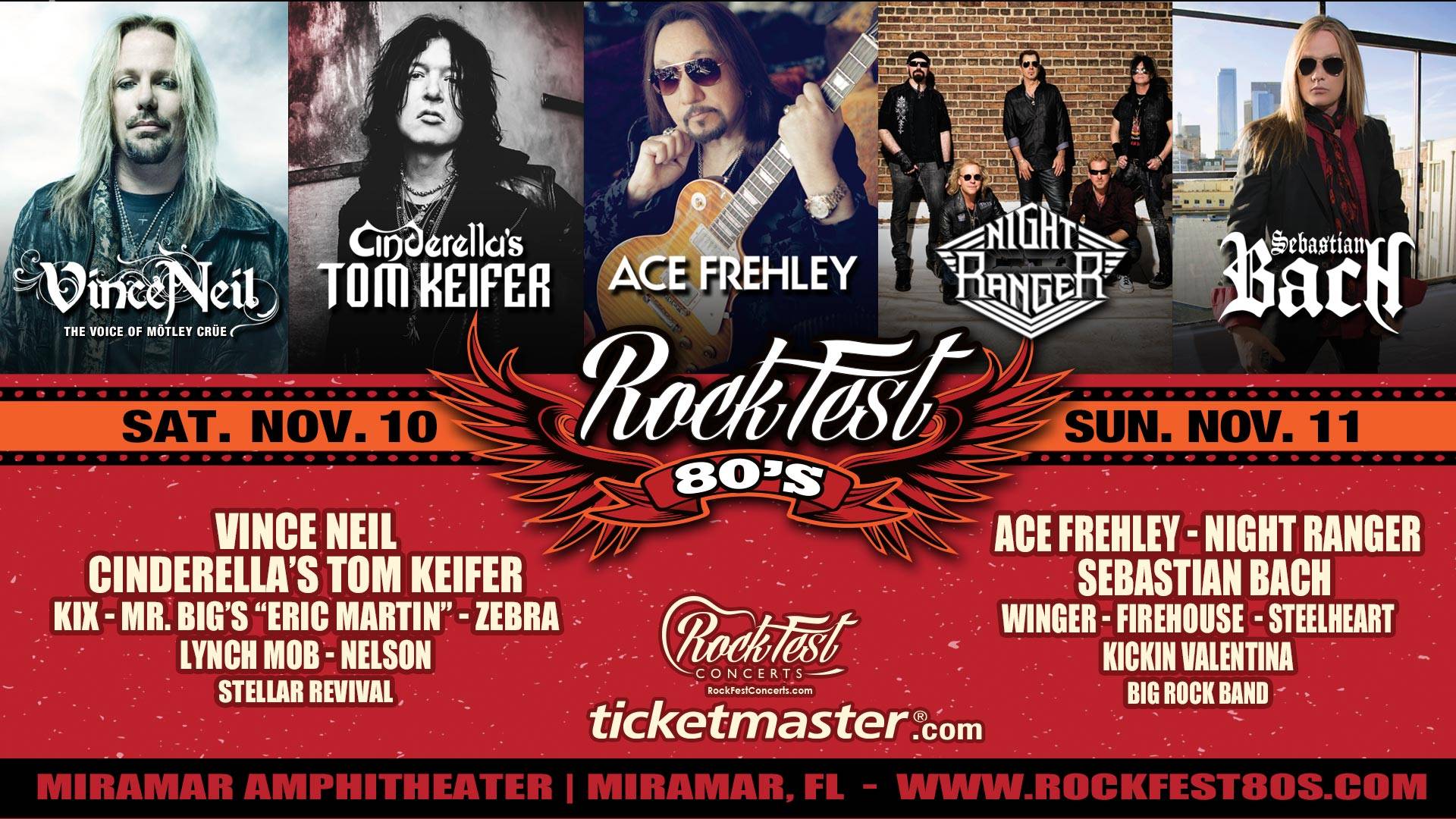 When you think of the 80’s, you think of big hair, screaming guitars, and over the top performances. While the years have passed, the music of that time still endures. Why? Because at the end of the day, the music really was great, and the bands that created it were supremely talented. All the top bands of that era still tour much to their fans delight. But it’s festivals like Rockfest 80’s that thrill the fans. By creating a two-day festival featuring some of the top bands all at one venue, Rockfest Concerts has given the fans a great weekend of music with this event in its third year.
On November 10th and 11th, Rockfest Concerts put together another great lineup for the third year they have been doing this. With beautiful sunny skies at Miramar Amphitheater in In Miramar Florida, the crowds poured through the gates on the first day. Those that were smart paid for the luxury seats that were under a canopy to help keep them out of the strong sunlight that bathed the area that day. The first Big act to take the stage was Nelson. While they are have had more than their fair share of rock and power ballad hits, today they were taking a stripped-down approach, performing only as an acoustic duo. You would think that their music would need electric guitars and a dynamic rhythm section, but with just the two brothers Mathew and Gunner on stage, it made for a wonderfully intimate performance even though this was an outdoor amphitheater. Playing a setlist with their songs and a cover as well this was a nice way to get things going. By the time they got to “(Can’t Live Without Your) Love and Affection” the crowd was singing along and enjoying the show.

The next band on the schedule was one that seemed to be a must-see act by the crowd was Lynch Mob. With guitarist extraordinaire George Lynch at the helm this is a band that everyone knew would put on a stellar performance. When the band hit the stage, they immediately launched into one of their hits “She’s Evil But She’s Mine”. Right from the first note, the guys were spot on. Singer Andrew Freeman was a ball of energy, working the stage like the pro that he is. As for George Lynch, getting to see this master do his thing was indeed a rare treat. Very few guitarists on this planet can play at the level he does. While their setlist seemed short, it was full of great songs not just from Lynch Mob, but the band that launched George Lynch to stardom Dokken. They closed out their time on stage with their megahit “Wicked Sensation” to the delight of the crowd.

The group that had the unenviable task of going on next was the hard-rock trio Zebra. The opening number on their setlist was one of their classic songs “Who’s Behind The Door”. Singer Randy Jacksons vocals were amazing. His falsetto was as good today as it was back when these songs were released. Not only was his singing great, but his guitar work matched the quality of his vocals. Of course, bassist Felix Hanemann was great as well, switching between keyboards and bass with ease. Even drummer Guy Nelson had his moment with an amazing drum solo during “The La La Song”. When Randy broke out his classic double neck B.C. Rich guitar and played “Tell Me What You Want”, the crowd loved it. From the first note to the last everyone was singing along with him.

The next act to take the stage was a great combination of two top bands, Eric Martin of Mr. Big and Steve Brown and PJ Farley of Trixter. With a combination of these guys, you knew they were going to have a memorable setlist, and memorable it was. They combined the best of both bands. Starting out with “Everybody Needs A Little Trouble” from Mr. Big’s catalog of hits, it was obvious that just like everyone else performing, they brought their A game. Eric Martin’s voice hasn’t changed a bit over the years. Listening to him belt out hit after hit was a real treat. Of course, guitarist Steve Brown was a treat to watch and listen to as well. It was easy to see he was enjoying every second on stage as he had a huge infectious smile his whole time on stage. When it came time to play the classic Mr. Big song “To Be With You”, this became one of those electrifying moments of the show when the crowd accompanied Eric Martin singing the song.

Next up was another top band that put out hit after hit, Kix. The energy level that these guys brought to the stage was astounding! Singer Steve Whiteman was a human dynamo. With this being the 30th anniversary of their megahit filled album Blow My Fuse, their setlist was the entire album. To be able to hear just this classic album played in its entirety could easily be a highlight of any show! When you add in Steve Whiteman’s stories about how the album came to pass and stories from the road it just made this all that much better.

As the sunset, it was now time for Tom Keifer of Cinderella to entertain everyone. With so many hit songs from their heyday you know the setlist would contain nothing but fan favorites. Opening with “The More Things Change”, Tom’s signature raspy voice hasn’t changed a bit and sounded great! Don’t just think of him as a singer though. Throughout the night he showed his musical talent as a guitar player who can play a wicked slide guitar. Tom also had time to show his prowess on keyboards playing “Don’t Know What You Got (Till It’s Gone)”. Of course, when they played this song, this was definitely a crowd pleaser with everyone on their feet and singing along.

With so many great bands performing today, and all of them worthy of closing out the first day, the final act to take the stage was Vince Neil. Yes, THAT Vince Neil, the voice of Motley Crue. This was the perfect act to close out this night. With a setlist filled with Motley Crue hits this was a performance to be remembered. Opening with the classic hit “Dr. Feelgood” Vince was clearly here to deliver the goods. Not only did Vince sound great, but he put together one hell of a great band. Featuring bassist Dana Strum, guitarist Jeff Blando, and drummer Zoltan Chaney from Slaughter, this lineup was clearly more than up to the task of backing Vince. Drummer Zoltan Chaney was a show in himself, at times playing with one foot on top of his drum kit and other times even standing on his kit while playing. During the performance Vince left the stage to let his band shine and shine they did. Playing first a wicked cover of the classic Whitesnake song “Still Of The Night” then taking on Led Zepplin’s hit song “Whole Lotta Love”. Closing out this amazing night of rock music was yet another Motley Crue hit “Wild Side”.

As the first day of this amazing festival came to a close, everyone clearly had a blast. Every band that graced the stage today sounded amazing. This day couldn’t have gone any better. From the weather, to the venue, to all the bands, everything was great and went off with out a single hiccup. The promoters obviously did their job to perfection and left everyone excited for what tomorrow would bring.